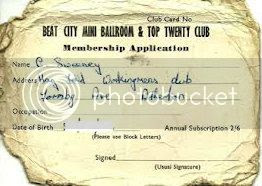 Ray Teret, 71, was arrested by Cheshire police yesterday for questioning about three rapes that allegedly happened before most of the cops who shook him down were born. He was described by the media, almost without exception, as Jimmy Savile's "chauffeur". But Teret — his name rhymes with ferret, not beret — was not only a good deal more than that to Savile, he was a good deal more than that in Manchester once the two had gone their separate ways.

Ray Teret kickstarted his career as Jimmy Savile's friend, flatmate, flunky and factotum. He stood in for Savile when he wasn't around and stood up for him when he was. He fixed things for the man who was destined to become Mr Fix-It. He was Savile's Mini-me, his H. R. Haldeman, his young ward Robin and his Squeaky Fromme all rolled into one.

The two met and hit it off on the cusp of the Sixties when Teret won a singing contest run by Savile at the Palace. At the time, Savile drove a Rolls Royce but lived in a grotty council gaff on Great Clowes Street in the Broughton Bridge area. Teret soon moved in. 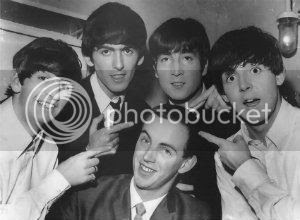 He worked as Savile’s backup DJ at his slew of Manchester residencies: the Top Ten Club at Belle Vue on Sunday nights, the Ritz Ballroom, and The Three Coins — or “The Three Cohens” as it would enter Manc lore because of its predominantly Jewish clientele. In 1964, no sooner had the club changed its name to Beat City than the Moptops themselves graced it with their presence. And Ray Peret was there to grab a snap for his scrapbook. Gear.

Perhaps naïvely, given yesterday's events, Ray Peret dropped some leaden hints in recent interviews about the fun and games that he and Savile got up to with teenage girls in the back of Savile's fleet of flash cars. Blanks duly filled in, Ray. But let's focus on the cultural milieu he moved in; any crimes are sub judice. 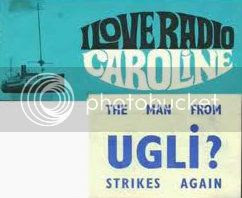 As Savile’s success with Top of the Pops took him increasingly farther afield, Ray Teret was there to take up the slack back in Manchester. And when most of Radio Caroline's star DJs jumped ship for the BBC’s new Radio One, Teret was among the first intake of replacements, billed as "Ugli Ray".

Back on terra firma, he became a local celebrity in the Seventies, thanks to his flagship three-hour daytime show on Piccadilly Radio. Not quite up there with Tony Blackburn or the Hairy Cornflake, perhaps, but in Manchester he was quite a bit more than just the bloke who’d driven Jimmy Savile around, let's put it that way.

The former NME music critic Paul Morley has described Ray Teret as a "sickly Mancunian reduction of Sir Jimmy Savile", which is accurate enough but sells him short. In the Sixties and Seventies Ray Teret was to the Manchester pop scene what Tony Wilson would be to its post-punk reincarnation in the decades to follow. Indeed, his sub-Savilean style could even be seen strutting its strangely artless stuff when Joy Division performed "Love Will Tear Us Apart" on Fun Factory, the Saturday-morning kids' TV programme that he fronted. He introduced them as "not a female vocalist, but a band". Oh, how we didn’t laugh.

But back when bands were still called groups, Ray Teret had a finger in every Mancunian pop pie. DJ, MC, impresario, promoter, radio star, TV personality and the region's go-to raffle-drawer — he even wrote songs for several local acts, including “My Girl” and "No, No, No" (oh, dear) for The Toggery Five.  For two decades in Manchester, he was de rigeur. He was ubiquitous. A face. He knew everyone who was anyone and was quite somebody himself.

"Jimmy Savile's chauffeur"? Clearly, for the tabloids it's not who you were but who you knew.
Posted by Archie_V at 12:54

Indeed, his sub-Savilean style could even be seen strutting its strangely artless stuff when Joy Division performed "Love Will Tear Us Apart" on Fun Factory, the Saturday-morning kids' TV programme that he fronted.

Which reminds me of a Viz joke about "they used to be called Fun Factory and now they're Third Reich", poking fun at New Order and Tony Wilson.

I was taking a gander at some of your posts on this site and I consider this site is truly informational! Keep setting up.. www.repeatprecision.com